Needle felting is the process of interlocking wool fibres together,  As the needle is repeatedly stabbed in a straight up and down motion the barbs catch the fibres and…

Needle felting is also called dry felting, because you do not need to use water and soap for this technique. Needle-felting is the process of interlocking wool fibers with the use of specialized Parbed needles. These needles are extremely sharp and have tiny barbs down the sides of the needle tip. By jabbing the needle into the wool, the fibers will interlock, thus creating the felt. This process is done without any water.

In the 19th century felt making was mechanized by using large plates of parbed needles to repeatedly poke through wool, forcing fibers to entangle by being drawn through the wool with the needles.  In the early 1980’s, David and Eleanor Stanwood decided to use a barbed needle from industrial felting to sculpt wool—transforming needle felting from purely industrial technique to handcrafted art form, so needles being to be sold individually as tools for home crafting.

This video shows how to perform the technique of making brooches by dry felting. 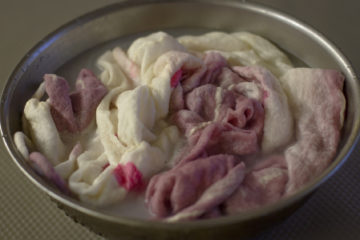 Wet felting is the process by which animals fibres are made into a sheet of non woven fabric through a combination of wetting and agitation. The animal fibers have a unique surface structure which consists Read more… 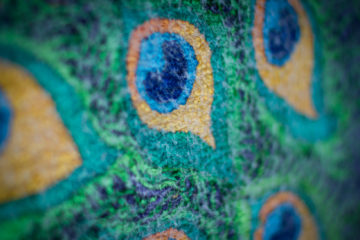 Nuno Felting is a type of wet felting with the addition of fabric. The name is derived from the Japanese word “nuno” meaning cloth. The addition of a fabric means that a stronger felt Read more…